It has more than one year now that Facebook released “Campaign Budget Optimization”.

Although the feature is out there for a while now, it doesn’t seem that much popular among the marketers.

I don’t know. Some people tested and didn’t get outstanding results. Some people just rather keep managing their budgets at the ad set level, which gives more control over how their money is spent. And some people just don’t like changes.

Well, like you or not, Facebook announced that this feature will become a fixed default that can’t be turned off.

If you haven’t started using it, or even experimenting with CBO, no worries, my friend. I’m writing this article to help you to understand how it works and how you should use it.

Conversion Budget Optimization is a feature that allows you to set the budget at the Campaign level, leaving it up to Facebook to distribute the budget across the Ad Sets.

Facebook claims that this will help to improve your average CPA by distributing in real time your budget to the top performing ad sets.

This means that Facebook automatically and continuously finds the best available opportunities for results on an opportunity-by-opportunity basis across your ad sets and distributes your campaign budget in real time to get you the best results possible.

It is available for all campaign objectives and for obvious reasons it’s best suited for for campaigns with multiple ad sets. 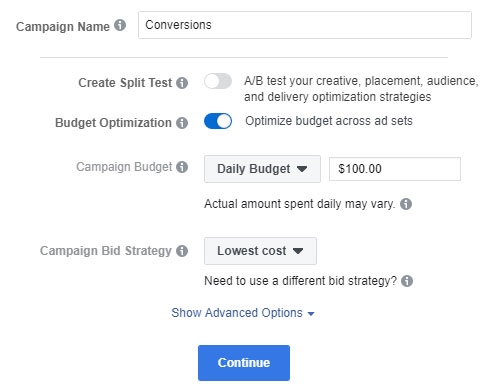 You can still set a Daily or Lifetime Budget and select your Bid Strategy almost the same way you would do at the Ad Set Level, having the option to select Lowest Cost, Bid Cap or Target Cost.

Just have in mind that all ad sets should be optimized for the same event, you won’t be able to have one Ad Set optimizing for Add To Cart and another one for Purchases in the same campaign.

And hopefully by the time it’s mandatory you should also be able to apply automatic rules to control budget in the Campaign Level, which is not possible right now.

As you probably is used to, or was if you already made the shift, you set your budget at the Ad Set level. 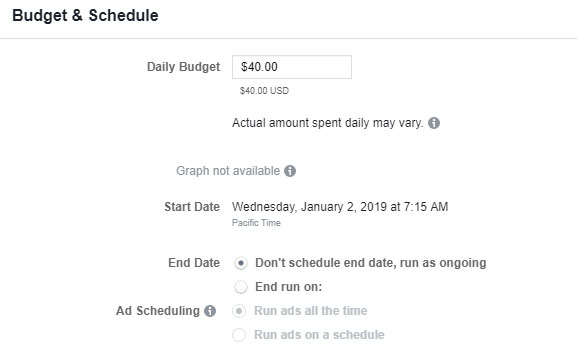 Each Marketer has its own strategies regarding how to organize campaigns and ad sets, but basically in each campaign we have multiple ad sets, targeting different audiences, with different interests, demographics, placements and bid strategies.

Based on that, we decide how much we want to spend with each one of those audiences, we analyse the data daily and we make changes to the budget according to the data.

It really depends on the marketer and there is no RIGHT way of doing it. There are a few guidelines Facebook advise us on following, but even tho, sometimes we get better results when we go against Facebook best practices.

Bottom line is, you decide how much you want to spend with each audience!

So what changes now?

Well, you might want to organize your campaigns a little bit differently now, for a series of reasons.

Right now, when you’re creating a new campaign, this option is OFF by default.

Well, you might want to organize your campaigns a little bit differently now, for a series of reasons.

Right now, when you’re creating a new campaign, this option is OFF by default.

Beginning in September you will no longer have this option, this will be turned on by default and you won’t be able to control budget at the Ad Set level.

This is supposed to give businesses an easier way to manage ad budgets and ensure optimal results.

It’s a continuous effort of Facebook into improving it’s AI and losing business owners from the headache of learning all sorts of strategies to run their ads. The easier it is for business to invest and get results, more money Facebook gets. Everybody wins!

When using CBO you can set one Campaign Budget and leave it up to Facebook to optimize it for you. As I said before, Facebook will do it in real time on an opportunity-by-opportunity basis.

As an example, in the figure below Facebook compares how your money could be spent when using Ad Set budget versus Campaign Budget Optimization. 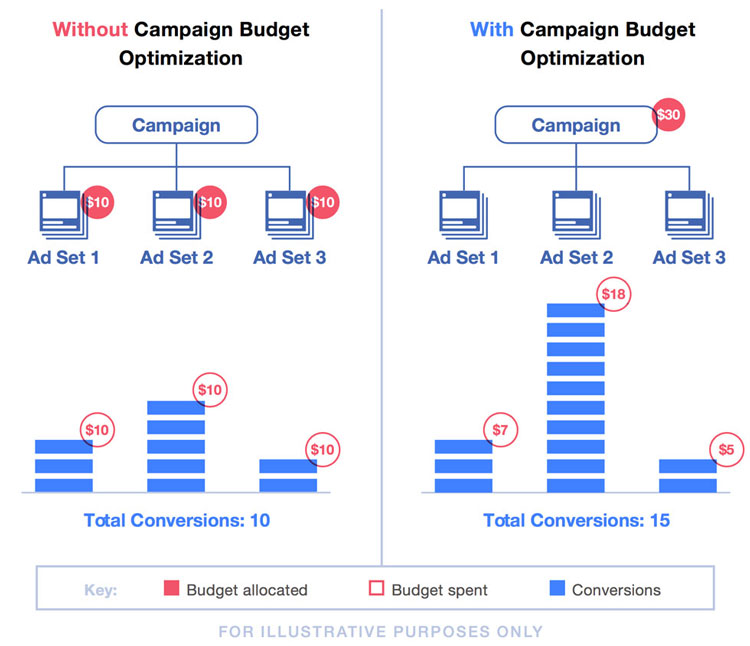 On the left, using Ad Set budget, you will be forcing Facebook to spend $10 in each Ad Set, regardless if the Ad Set is giving you a lot of conversions or none at all.

Facebook will always go after the low hanging fruits first.

For example, in the Ad Set 1 Facebook might be able to get you 3 conversions for $7, and the fourth conversion would probably cost you more than the budget you have left.

So, if you’re using Ad Set budget, you will force Facebook to spend this $3 remaining dollars to TRY ( and most likely fail) to find you a fourth conversion there.

BUT if you’re using CBO, for example, Facebook will take those $3 extra dollars and move it to Ad Set 2, which has way more low hanging fruits left.

If you want to go a little bit deeper on how Facebook manages and distributes the budget when using CBO you can read this article: Understand campaign budget optimization reporting when using the lowest cost bid strategy

If Facebook is now distributing my Campaign budget across Ad Sets, I should just make one Campaign and have all my ad sets there, right?

I wouldn’t go that route. I’ll give you a few examples so you can understand a little bit better and can formulate better your strategy.

Let’s say that you have two products that sell very very well at your store. One costs $500 and the other one costs $40.

Well, if you’re managing your budget at the Ad Set level, you can have one (or multiple) Ad Set for each one of those products in the same Campaign, right?

But what happens if you’re using Campaign Budget Optimization?

Even if you have better margins and usually gets a better ROAS advertising product A, Facebook won’t understand that, Facebook will only take into consideration how much it costs to get you the conversions you asked for.

Be careful when advertising for multiple countries as well. It’s normal to have some countries with cheaper CPC and cheaper Cost Per ATC but higher CPA.

If I was running those Ad Sets with CBO and optimizing it for ATC or Link Clicks, Facebook would probably had spent most of the budget towards Singapore (SG), which has a cheaper CPC and Cost Per Add to Cart but higher CPA. Facebook wouldn’t care if the US is generating a better ROAS, if I’m optimizing for ATC, Facebook will look for delivering Add To Carts.

Those are just two examples of things you should avoid when using CBO, and I’m sure there are a many many others!

The best way of avoiding those and other mistakes is understanding how CBO works, and thinking through when building your campaigns.

Does it really work?

Honestly, that’s not the question right now. Facebook invests Billions of dollars into it’s ad platform and it is Facebook’s best interest that business owners and marketers have the best return possible when investing into Facebook Ads.

Even if the CBO hasn’t worked for you, it is probably a better option in the long run. And you actually have no other option other than make it work. Facebook is constantly working and improving it’s features, so we hope that until September the AI will be even smarter and we can get some killer ROAS.

It’s not a miraculous feature that will skyrocket your campaigns just because you’re using it. In theory it seems very nice, but we all know that theory is just theory.

Regardless of improving results or not, it really saves time when creating campaigns and setting budgets. Specially for those who are young in the game, setting and managing budget for each ad set might be a headache.

What should I do now?

You still have until September until Facebook starts to roll out this as default, so my advice to you is: Start testing now!

The sooner you start testing the better.

Start testing and join our community to discuss with other marketers what is and what isn’t working for CBO.

The best thing you can do is learn with other’s mistakes! Saves you time and money!

But you do should run your own tests! You might get some good results out of it.

In September all campaigns will migrate to CBO, which means that you’ll have to check how your campaigns are structured and make the changes before that.

As you read above, there are a few Ad Sets that you might want to separate in different campaigns.

Every month I choose a few entrepreneurs to personally help them scale their Facebook ads and businesses.
 
Watch the free training and apply here: https://www.ecommercescalingsecrets.com/home